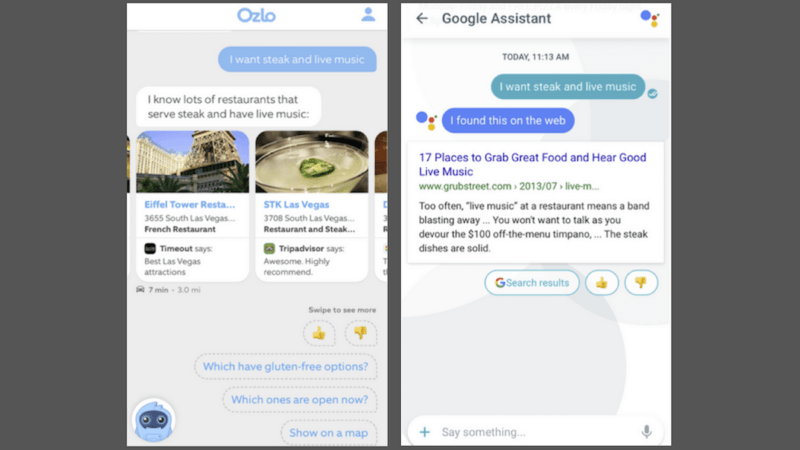 Facebook announced Monday that it was acquiring for its Messenger platform an intelligent agent called Ozlo, created by the Palo Alto, California-based company of the same name.

Deal terms for the three-year old company were not made public. But Facebook may well have plans for Ozlo beyond Messenger.

Last fall, Ozlo co-founder and CEO Charles Jolley told me that Ozlo was the only independent intelligent agent left, given that Samsung had picked up Viv.

As an agent, rather than simply a lower-level bot, Ozlo could boost or replace M, the still-in-progress intelligent agent that Facebook has been grooming for Messenger.

Jolley had described Ozlo to me as “the only assistant that can link together competing sources of information.” As an example, he recalled asking Ozlo about a place where he could get “some steak and live music” during a trip to Las Vegas.

Instead of simply calling up a Yelp recommendation or quoting an online article about local restaurants from a Las Vegas newspaper, Ozlo pulled info on steak places from a Time Out magazine story and combined that with info on live music venues from TripAdvisor.

In other words, he said, Ozlo is more than an intelligent search engine; it’s an agent that can synthesize data from multiple online sources.

Facebook will let brands target ads to people who RSVPed to their Pages’ events
Snapchat will let brands measure its ads’ impact on sales, results against rivals
How to use the power of social media to better market your online store
7 Quora ads mistakes and how to avoid them