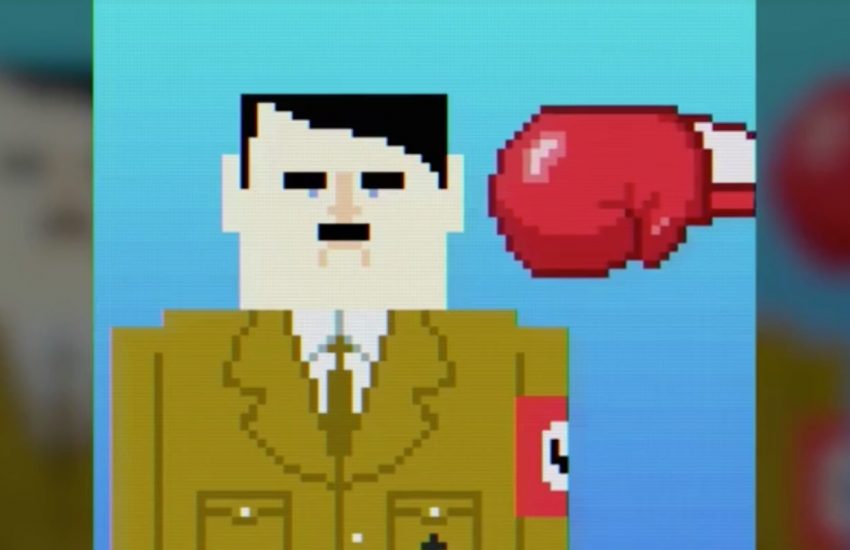 Super Deluxe has used its own tech to make Facebook Live streams, like “Punch-A-Nazi!,” more interactive for live viewers.

Posting comments to melt a block of ice should not epitomize interactive Facebook Live programming, even if it seems apt. Instead, the proper paragon may involve punching a Nazi.

In February, Turner’s digital entertainment arm, Super Deluxe, produced a Facebook Live broadcast that opened with an arcade-style image of Adolf Hitler and asked viewers, “Is it okay to punch a Nazi?” Then it gave them the option to punch a Nazi. And for four hours on a weekday evening, hundreds of people did, punching at the air with their phones and having the action mimicked in the live stream.

Super Deluxe’s “Punch-A-Nazi!” broadcast typifies how the comedic publisher appears to have cracked the code on getting people to tune into a Facebook Live broadcast while the broadcast is actually live. With or without Nazi-punching. Super Deluxe’s recipe combines hours-long broadcasts, a programming schedule tailored to various time zones and proprietary software that lets live viewers interact with a broadcast beyond Facebook likes and comments, enticing viewers who missed the live stream to tune in to the next one.

For most Facebook Pages, a broadcast’s live viewership is almost so lacking as to make the interactive experience an afterthought. The typical Page’s broadcast gets most of its views after the live stream has ended, said Nick Cicero, CEO of video analytics firm Delmondo. Why go the extra mile to let people participate in the broadcast if the eventual majority of viewers will have missed out on the opportunity? But Super Deluxe has flipped the script and, in turn, flipped the viewership ratio.

Super Deluxe schedules its live streams to give them the best chance of catching people’s attention. When it began live streaming on Facebook in May 2016, its broadcasts typically ran for 15 or 30 minutes each; now they average two-and-a-half hours a pop. That prolonged window — and the fact that Facebook’s algorithm ranks live videos higher in the news feed — ups the chance that more people will come across the stream. Super Deluxe also schedules its broadcasts to start typically around 2 p.m. PT to catch West Coast viewers in the afternoon slump, East Coast viewers as they’re getting off work and British viewers when they’re tucking into bed.

But Super Deluxe’s real secret sauce is the Live Kit software it has developed to more easily incorporate viewers’ interactions with its broadcasts, as well as to let viewers interact beyond the basic Facebook options. Live Kit, first used in June 2016, is “the real engine behind what we do,” Ghahremani said.

The software plugs into Super Deluxe’s existing social tools to facilitate somewhat standard things like featuring Facebook comments in a broadcast or having viewers vote via Facebook reactions on how a live telenovela-style show’s plot should play out. Live Kit also allows Super Deluxe to take fuller advantage of digital’s potential for truly interactive shows beyond what Facebook enables. Viewers have been able to video-call into a show using Snapchat and to upload selfies through an off-Facebook microsite that an on-air chef would cook into pancakes live. And they’ve even been able to interact through physical actions. Super Deluxe used Live Kit so that viewers could upload selfies to be turned into pancakes.

“We’re designing stuff for viewers to be able to link their cell phone, physically, to the live broadcast and use it as a Nintendo Wii-style gesture remote. So in our musical stuff, they’ll be able to wave a lighter or throw tomatoes,” said Ghahremani.

When Super Deluxe gave people the chance to punch a Nazi, they were actually able to punch a Nazi, in a way. Viewers could pull up a web page on their phones and punch the device at the air, and Live Kit would track the device’s accelerometer to convert the physical punch into a virtual one in the broadcast.

These interactive experiences are designed to reward viewers who tune in for the live broadcast, but they also have the effect of encouraging non-live viewers to become live viewers.

“It may make them feel like, ‘I wish that I tuned into this [live]. How cool that people interacted with it in this way.’ And encourage them to sign up for live notifications,” said Ghahremani.